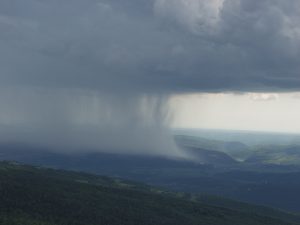 The climate in Učka Nature Park is a result of its geographical position, closeness to the sea, and the structure of its relief. According to the Köppen climate classification, higher parts of the park have a moderate warm rain climate with warm summers (the so-called “beech climate“), while the lower parts such as Opatija and the narrow coastal strip have a moderate warm rain climate without dry periods and with hot summers (the “camellia climate“).

Precipitation is more abundant in the higher parts than on the coast. It takes place mostly at the colder time of the year, in late autumn and early spring, predominantly as rain and snow in winter. Hail only occurs a few times a year.

The most important winds in Učka Nature Park are those coming from the north-east (in winter as bura, in summer as a night breeze), south-east (especially as jugo – the sirocco – in spring and autumn), north-west (especially in summer), and other, less-frequent winds.

Insolation on the continental, western part of Učka is somewhat higher than on its coastal side. It should, however, be emphasised that the hours of sunshine in Opatija are influenced by the height of Mount Učka – in summertime, the sun goes down behind it as early as 5:30 p.m. This is why the western slopes of Učka have higher insolation than Opatija and its eastern slopes.